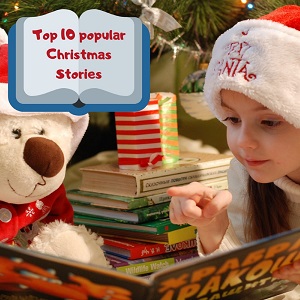 The magic of Christmas has captured the imagination of millions in addition to inspiring the spirit of giving and joy that permeates the air this time of year. This imagination and magic has translated into creative masterpieces in the form of some of the Christmas classics that we enjoy at least a few of each and every year. Here are then (in our humble opinion) the top that timeless classic list.

1. It’s a Wonderful Life
One of the top ones in particular for Americans comes in the form a classic black and white cinema: It’s a Wonderful Life. Release in 1946 this film depicted the life of a small time American Banker Bill Bailey (as played by James Stewart) who survived the Great Depression and emerged as a leader in the community. When all went downhill the man at the end of his rope contemplates suicide when suddenly an angel appears and shows how dire things would be for his loved ones if he were never born. At the end he learns the true meaning of Christmas and of in a deeper way life. It ends up all about the love of friends, family, and the spirit of giving in a close-knit inspiring community.

2. A Christmas Carol
Written by English Author Charles Dickens. First released on the 19th of December 1843 it depicts to the very stingy businessman Ebeneezer Scrooge. Scrooge is very much a Grinch in wealthy businessman form. He seems to stand for quite for the opposite of what tree Christmas is about, a gloomy fellow who only cares about money and stepping on whoever he has to in order to obtain more of it. 3 ghosts visited Scrooge, however represent the Christmas Past, Present, and Future. After his experiences with the spirit Scrooge emerged a changed main. His story demonstrated how even those with the coldest can be transformed into kind and charitable men, perhaps in this sense through power of the Christmas spirit.

3. How The Grinch Stole Christmas
Even worse than Mr. Scrooge, the Grinch, as depicted in this Dr. Seuss children story, despises Christmas with a passion. Unlike Scrooge he is simply not content to squeeze penny together and hide in his lair of despair until the season passes. Instead he sets out to do something about the holiday. Disguised as Santa he steals the toys, the feast, decorations, and everything that relates to the holiday festivities. His heart grows in size, however, as he see that his efforts have failed because Christmas was about something deeper than he could have imagined.

4. Rudolf The Rednosed Reindeer
This children’s story written by Robert L. May depicts the story of Rudolf The Rednosed Reindeer. Rudolf isn’t like the other reindeer because he has a very bright red nose that often lights at random intervals. Because of how odd this is (or perhaps disruptive) he is not allowed to participate in the reindeer games or to train one day to pull that sacred slay. On one foggy night however, Rudolf because of his shiny nose is able to lead the way through the storm to save Christmas.

It’s a beloved children story that teaches the little ones that it’s ok to be different and that some times our differences are our greatest strengths. This short story was later adapted into film form through various cartoon and claymation adaptations that millions of families would enjoy for years to come.

5. The Gift of The Magic
Written by author O’Henry (the pseudonym for Sidney Porter) this more traditional religious story depicts the tale of the wisemen who delivered the three gifts to the newborn Jesus at the stables of the nativity. O’Henry’s stories were known for the form of realism and their clever twist endings. Most argue the appeal to this story was how depicted everyday people and lesson of love and kindness it so well portrayed.

6. The Nutcracker and The Mouse King
This story depicts the experience of a young girl who is whisked away by the Nutcracker to a magical kingdom of dolls and toys that come to life, him being the ruler. During this story it depicts his struggle with the Mouse King, a ferocious rodent ruler and fabled foe. Written original by story teller E.T.A Hoffman it was later adapted by Russian composer Pyotr Ilyich Tchaikovsky into an opera in 186. Since then it has been adapted into many musicals and cartoon children cartoon films and has been become a traditional story for the holidays.

7. Twas The Night Before Christmas
In 1822 poet and writer Clement Clarke Moore wrote the poem entitled Twas the Night Before Christmas also commonly called “A Visit from St. Nicholoas”. This poem actually helped to shape the image we have today of Father Christmas. Before the writing of this particular story read by millions and readapted many times, St Nicholas the beloved patron who delivered presents to the poor had never seen a reindeer or a great hideout in the North Pole.

8. The Burglar’s Christmas
Written by Wila Kather in 1896 it was first published in Home Monthly magazine under a pseudonym under which she called herself “Elizabeth L. Seymour” Many even of her critics praised the plain language and down to earth way of portraying regular people. They often praised her cutting edge works and one of her associates novelist Sinclair Lewis when he claimed the Nobel Prize in Literature he gave her praise saying she should have won it instead.

9. The Holy Night
Selma Lagerlof was a Swedish female author who became, quite impressively, the first woman to win the Nobel Prize in Literature. Her story The Holy Night depicted the story of very bitter and unpleasant old shepherd who witnesses the divine miracle of a baby Jesus’ birth. During his amazing and inspiring ordeal he eventually discovers the true meaning of Christmas in the purest and most divine sense.

10. A Kidnapped Santa Clause
Lyman Frank Baum wrote a number of stories and was most known for authoring The Wonderful Wizard of Oz. In a Kidnapped Santa clause he introduces an intensely adventurous element to the Christmas tale by telling the story of how a small group of ill intentioned demons work together to kidnap Santa. They do so in an elaborate plot to stop Christmas and keep children from the joy it will bring. Offering a more exciting adventure, if not a somewhat dark one, this story became widely known as a very influential piece of the Santa mythos.

Why not hire a professional Father Christmas performer to read them for your private or corporate event! To get a quote click here to email us your requirements!

Top tips to increase Christmas in-store sales Product promotions are at their peak at Christmas.…

Who IS Father Christmas?

Who IS Father Christmas? Where does he come from? How did he get to be so loved and his red suit so iconic? How has he managed to last through the centuries and be relevant today in the digital age?…

Hire a Santa 365 Days of the Year! Christmas is the one day of the…